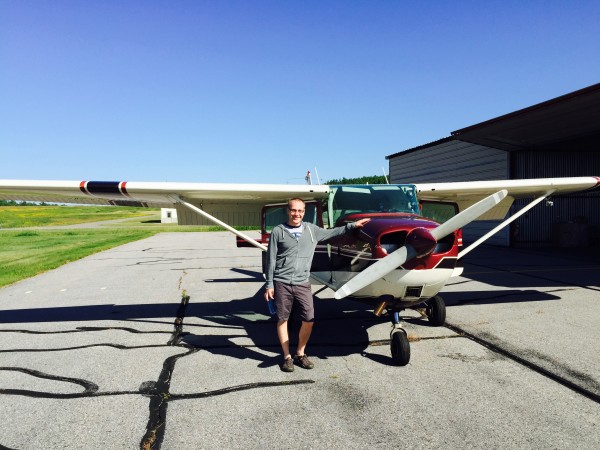 A co-worker of mine has a yearly camping trip with some buddies up on Namakan lake that borders Minnesota and Canada.  He has been a little hesitant to go flying with me.  I’ve had my ticket for a couple of years now and pester him often in the office to go up for a flight with me.  Well a couple days ago the weather was looking amazing. I wanted to be sure to have nice and smooth air for him since this would be his first GA flight.  That can be somewhat difficult to find during the hot summer months with the density altitude sky rocketing and the afternoon thermals making most flights a little bouncy.  It just so happened the weather fit the bill nicely.  It was warm, but there was little to no wind which made for some very calm skies. After preflighting the plane I called up flight service to get a wather briefing and to file a flight plan.  Normally on a local sightseeing flight I wouldn’t file a flight plan, but since we would be dipping in and out of Canada as we flew along these border lakes, it is required to file a flight plan.  We took off out of KORB and headed North up to Namakan.  There are lakes all over Minnesota, but as we approached the border it sure was undeniably apparent.  As we flew over Namakan and turned East, lake after lake after lake lined up like dominos as far as the eye could see.  We traveled east over Rainy Lake and Crain Lake before ascending above 4,000 ft. MSL as we entered the Boundary Waters Canoe Area.  We continued East over Lac La Croix, then on to Crooked Lake where we caught a glimpse of Curtain Falls that empties out of Crooked Lake and into Iron Lake.  From there we headed South to Trout Lake and then Lake Vermilion and back to Orr. It was a great day for a flight and it was fun getting Troy up for his first flight and give them the opportunity to see some of the area he’s traveled through by boat from the air.